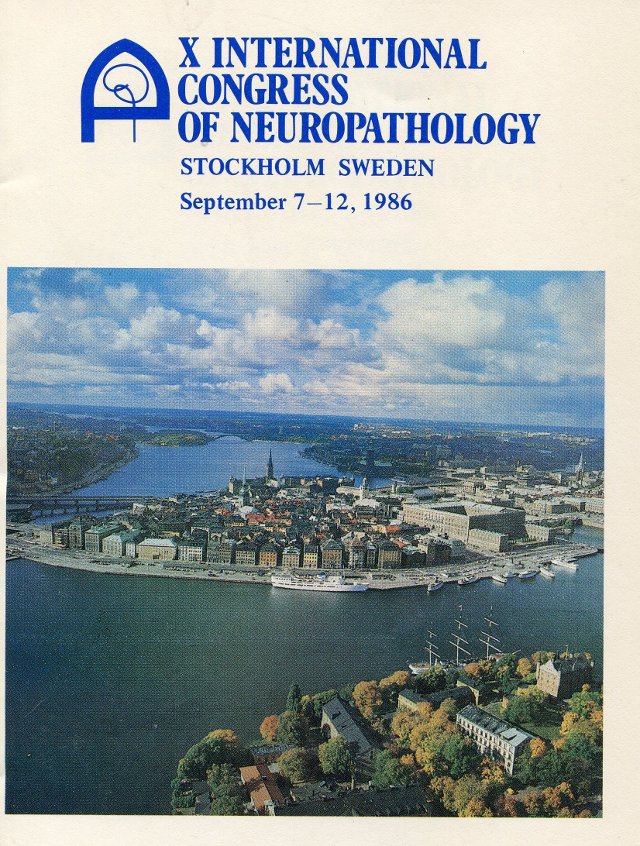 To host an international congress is not an easy task and must be planned in such a thorough detail that nobody notices all the difficulties involved. Previous congresses were most often run by a few persons including one President, one Secretary-General and one Treasurer. However, the Scandinavian Neuropathological Society set up an entirely new congress organization that involved four committees and many members of our society took part in the planning. That proved to be very important for the scientific, social and economic outcome of the congress.

The congress took place in Folkets Hus located in downtown Stockholm. The congress site was very good and we worked together with persons from Stockholm Convention Bureau. Every morning all the participants had the chance to be together and listen to a symposium. The titles of the symposia were: “Pathobiology of the axon” Stanley G. Waksman United States (chairman), “Neurotransmitters” Annica Dahlström Sweden, Yves Agid France (chairmen), “Energy crisis in the brain” Fred Plum United States, Nils-Henric Diemer Denmark (chairman),, “Viral infections” Richard T. Johnson United States, Krister Kristensson Sweden (chairman), “Intracranial neoplasms and hamartomas of the infancy” Lucy Rorke United States, Arne Brun Sweden (chairman).

By keeping the morning hours in a large hall we created an atmosphere that the participants belonged to a large international group with a common interested in the science and practice of neuropathology. During the lunch break the large hall was divided and in this way we got three separate rooms for the afternoon sessions. About 900 presentations were delivered as platform and poster presentations.

The congress attracted as many as 1300 participants from many different parts of the world. That was many more persons than in previous ISN congresses and was very important for the successful economic outcome of the meeting. Until now no other ISN meeting has reached such an interest from so many individuals. The question is of course why this happened in Stockholm. I believe that the interesting scientific program, the very careful planning and extensive promotion were very important factors for the outcome of the congress. In addition, Stockholm as a congress city is just excellent.

The social program included a welcome reception at Sheraton-Stockholm Hotel, reception at the City Hall, a concert at the museum of music and excursions in and around Stockholm. An elegant banquet with dinner and dancing took place at the famous Grand Hotel overlooking the Royal Palace in Stockholm.

Personally, I was working very hard for this congress and spend almost one year of my time for the planning and promotion of the meeting. Without the help of so many dedicated and clever colleagues from the Scandinavian Neuropathological Society it would not have been possible to get such a good outcome of the congress. Years after the meeting people used to praise the Scandinavian Society for the 1986 ISN congress.