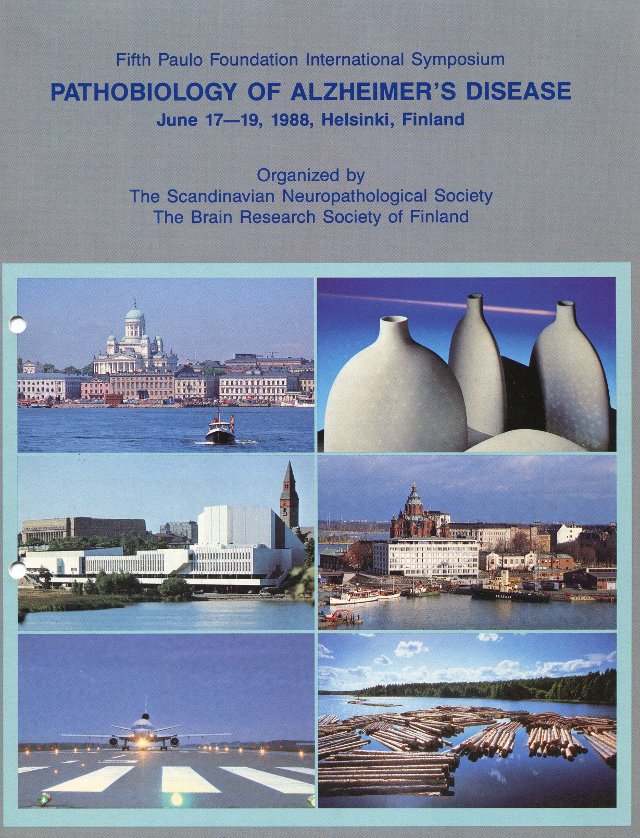 Organized by the Scandinavian Neuropathological Society in collaboration with

The Brain Research Society of Finland and the Paulo Foundation

The Symposium was one of the very first international meetings focusing on the basic molecular mechanisms of Alzheimer´s disease and related conditions. Its aim was to promote the integration of the newly discovered structural, immunocytochemical, biochemical, and molecular genetic data into a working hypothesis on the pathogenetic mechanisms of this devastating disorder. The speakers included such leaders in the field as Blas Frangione, Colin L. Masters, Dennis Selkoe, Rudolph Tanzi, Robert D. Terry, and Henry M. Wisniewski. The scientific program comprised, in total, 61 oral or poster presentations. The top speakers and the timely and exciting subject had attracted over 150 participants from the United States, Canada, Australia, Japan and 14 European countries to Hanasaari, the Swedish – Finnish Cultural Center on a tiny island in the Helsinki archipelago. The opportunity to relax in an authentic Finnish sauna bath contributed to the pleasant  and informal atmosphere of the meeting, facilitating the exchange of ideas and professional experience. Intellectual interaction was further enhanced by a varied social program, including a dinner cruise to the 18th century sea fortress Suomenlinna/Sveaborg, a UNESCO World Heritage Site, a chamber music concert at the House of Nobility, and an excursion to Hvitträsk, the wilderness studio/home of the famous architects and designers Eliel and Eero Saarinen.