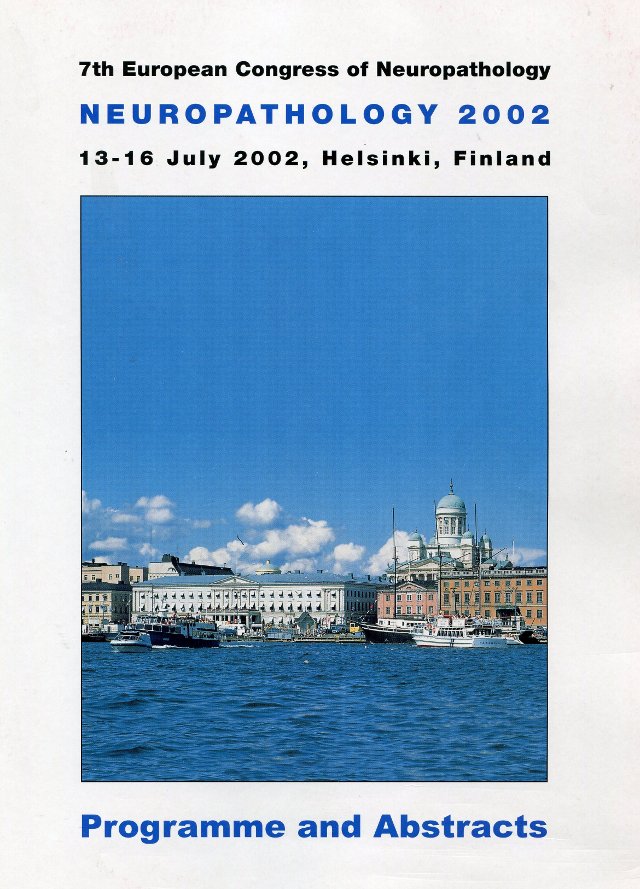 THE SEVENTH EUROPEAN CONGRESS OF NEUROPATHOLOGY

With close to 500 participants from all continents this European Congress became a truly international event, the largest numbers of delegates actually coming from the United States and Japan. British, French and German colleagues constituted the most numerous European groups. The scientific focus of the Congress was on the molecular mechanisms behind the cyto- and histopathological and clinical manifestations of neurological diseases. The basic idea was to encourage the neuropathologists to actively embrace the new molecular technologies not only in their research but also in their daily diagnostic practice. The eight plenary lectures by  top scientists, the 18  workshops on selected hot topics with 76 oral presentations, and the about 230 posters illustrated the endless possibilities created by these new methods for a detailed dissection of the molecular causes and pathogenetic mechanisms of neurological disorders, paving the way for more reliable diagnosis and rational treatment. An innovative interactive electronic slide seminar, with real time anonymous participation by the thrilled  attendees, was organized by Dr. Anders Paetau of Helsinki. A full audience sat fixed on their seats until the very end of the last presentation of the Congress, Dr. Charles Weissmann´s plenary lecture on the ”Propagation of Prions”.

The Congress was held at the ”Biomedicum Helsinki”, the attractive and brand-new biomedical research center of the University of Helsinki. The pleasant and enthusiastic atmosphere was enhanced by a sunny and warm weather and a varied social program. The opening ceremony and reception were held at the historical Great Hall of the University of Helsinki with a piano recital (Liszt and Sibelius) by Laura Mikkola, and the City of Helsinki invited the participants to the Helsinki City Hall. The Congress Dinner was served at Restaurant Walhalla in the 18th century sea fortress Suomenlinna/Sveaborg, a UNESCO World Heritage Site.

In order to facilitate the participation of young researchers and trainees, a well-attended special EURO-CNS course on brain tumors was arranged at the Biomedicum Helsinki, immediately preceding the Congress.